Trash No Land says Start No Fires! Forest Service and Fire Fighting officials say target shooting can and does start fires under certain conditions. It is highly probable those conditions are present each time we go out to shoot in the summer. Some conditions may be just fine most of the year, however, when fire season begins, site conditions change. This means you may need to modify your standard shooting plan. Such fire hazard conditions include;

Let’s say you usually shoot within the conditions outlined above. But now it’s summer and the fire season is upon us. So what do you do? Change it up a notch and rethink your routine!

Ammunition selection – When steel and copper core bullets strike a hard surface a tremendous amount of friction is generated. Friction is heat. Super heated fragments, very tiny in size, fly off in various directions. They can land in dry tinder and smolder for quite some time. You may be long gone when a fire actually ignites. We suggest lead core bullets, for summer use, because they are less likely to ignite surrounding vegetation

Dry areas – Your favorite shooting place has changed with the season. It’s no longer green and moist. It is now a highly ‘fire’ dangerous place to shoot. Time to find a new place with only dirt or gravel with no dry tinder.

Impact zone – What? No steel? Steel can be just fine, as long as the other conditions are met (no dry tinder, better ammo selection and a soil or gravel impact zone). It is always best to have your steel angled to deflect a downward shrapnel path. Avoid rock surfaces to lessen the spread of super heated fragments. Select non-flammable backstops. Never use stumps, down logs, and trees as they are prime with dry tinder. 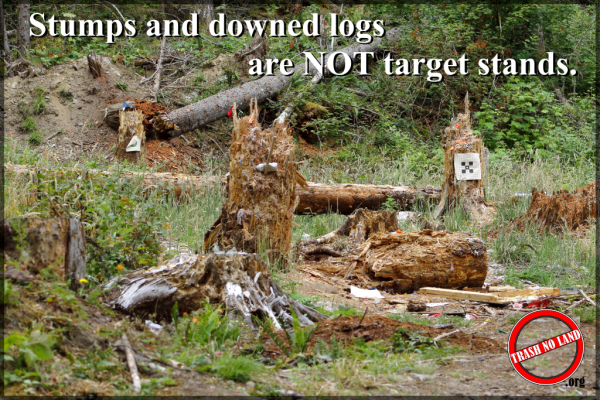 Mulched tinder inside can ignite from hot bullets & striking each other.

Choose an area with earth soil or gravel to absorb the bullet. Always use a high berm. 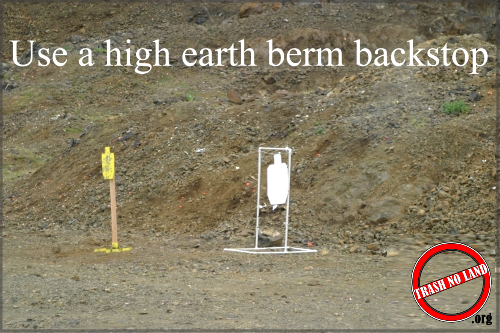 Place targets in the lower half, and in front of the berm.

Temperature and Wind – Shoot early on a day forecast to be hot or simply wait for a cooler day. Pick a day with low to no wind so fragments won’t be carried away into dry tinder.

Target selection – Switch to paper, cardboard or splatter targets. Even clay pigeon targets are good choices. Be sure they are legal (manufactured specifically for target shooting or home made printed targets).

Explosives and incendiary – Do we really have to address this subject? Obviously no explosives or incendiary devices on public land. That includes exploding targets, such as a binary explosive like Tannerite. Tracer rounds have a mild incendiary effect, and can ignite flammable substances on contact. Shooting propane tanks are also against the law on public land.

Tracer rounds and explosives are illegal on ALL public lands.

Have a blast on your own private land but not on public land. It’s illegal.

Safety gear – Standard stuff for shooting at any time of year, pack a box of safety gear. Include a fire extinguisher, shovel, extra water jugs, heavy duty gloves and a large towel to soak with water. 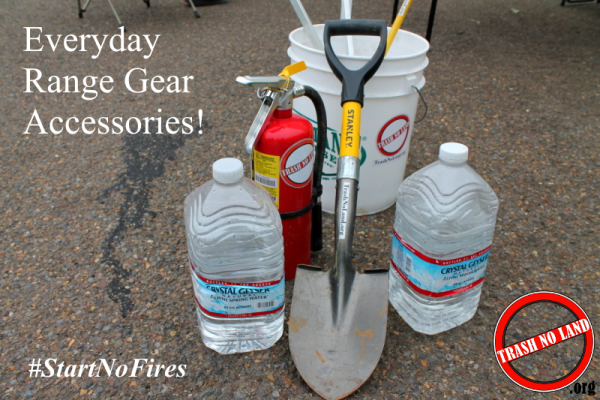 Required during fire season, but always pack year round.

Communications – We don’t always have phone reception in the woods but still pack a cell phone. There may be just enough signal to call 911. If you have a CB radio, bring it. Other types of radios are available and should be considered, depending on where you shoot.

Considering the high risk in the fire season, it’s always best to be Fire Safe than Fire Sorry!